Archive for the tag “Rome hbo”

The HBO series “Rome” aired from 2005 to 2007. The series was created by Bruno Heller, John Milius and William J. MacDonald.  Season one focuses on the rise of Julius Caesar and the season ends with his stabbing in the Senate.  Season two focuses on Rome during the aftermath of Caesar’s death and on Julius Caesar’s nephew Gaius Octavian who became the first Emperor of Rome (Augustan Caesar).  This was an uncertain time which included a struggle for power between Augustan and General Mark Anthony.  The series is mostly framed around the lives of two Roman Legionaries Lucius Vorenus and Titus Pullo.  While this great series is deserving of a standard review, I will focus on one aspect which I found most interesting in the series.  This is the subject of Royalty and slavery.

Rome was run by aristocratic families.  These Royals manned most of the top governmental and military positions. Underneath them was a continuum of upper to working classes that the Royals referred to as “plebs” and “proles.”   Underneath the proles (working classes) were the slaves. These slaves took part in the agricultural type activities that people think of in the American slave experience (as well as mining which was the worst form of slavery) but also had administrative positions that gave some slaves more responsibility and power than most free men had.

In the HBO series Rome, Caesar had a slave named Posca that was at his side at all times.  Posca was an educated slave from Greece that was like a personal assistant to Caesar. The Royal women all had personal slaves (or body slaves) that assisted them.  These slaves would help the women get dressed, offer advice, and even stood by while they had sex.  These personal slaves were everywhere, but at the same time, the royals treated them like they weren’t there.  The royals would have personal conversations that could be very damaging to themselves (if anyone heard them) with slaves standing nearby.

While watching Rome I started thinking about an episode (1) of the Follow the White Rabbit where the Rabbit discussed Joseph. P. Farrell’s book “Babylon’s Banksters” (2).   Apparently many of these administrative slaves (like Posca) ended up in high positions at the end of the Roman Empire.  The descendants of these slaves became the new Royal families at the end of the Empire. These slaves came out of Greece and Asia Minor (Babylon) and slowly replaced the old Roman stock of Royality.  These same former slaves (the new Roman Royality) and their posterity ended up becoming the big financial houses in the middle ages (like the Medici’s).  These families spread from Venice into Germany and Amsterdam and then into London.  These Royal families are sometimes referred to as the “Black Nobility” of Europe.

It’s important to ponder the difference of mindsets between Royals and slaves.  Royalty became royalty because their families’ fought to the top and refused to be slaves themselves.  Slaves were slaves because they were too scared to fight to the death or kill themselves before becoming slaves.  Allowing oneself to become a slave shows a lack of faith in God and the afterlife. In the Rome series the Royals were all portrayed as willing to kill themselves instead of being captured by their enemies.  In fact, even after a defeat in battle the Royals would sometimes fall on their sword, rather than live with the shame of losing. During the last episode of the series Cleopatra’s body-slave was trying to talk her into going into hiding from the Romans.  Cleopatra rebuked her slave saying it was a “slave answer” to talk of living on the run. The only time it was ever acceptable to run was in a retreat. After the retreat one was expected to fight their enemies again.  But if there was no hope for a future victory, one would rather die than live in shame. The Royals thought they would be rewarded for their honor in the afterlife.  Royals had more faith in God and the afterlife.  Slaves were willing to be degraded than die in honor. Slaves are less “holy” because they lived for life on earth.

After knowing this, one has to think about what the effect this would have on a total society when the Monarchy of that society is made up of former slaves or descendants of slaves?   Can this explain why mercenaries were used in such large numbers in the late Roman Empire (Royals and freemen were less eager to fight their own battles since the stock of the Roman empire had amalgamated with slaves in such large numbers)?  Is this why a faith like Christianity spread so fast?  Christianity is a slave faith.  The Bible has a passage that says “the meek shall inherent the earth.”   The Globalist elites themselves could very well be the “Black Nobility.” So when considering the profane, goyim masses and their Black Nobility and Jewish Masters (Jews are also a slave descended people), it really may end up being true that the “meek” (slaves) will “inherit the earth” if the Anglo-American-Judeo elites are successful in implementing their New World Order.

The New World Order being built by the Black Nobility is being built using deception (such as the program for White genocide at the page at the top of this blog).  It was probably the case that the Black Nobility became the aristocrats in late Rome in the same way.  The honorable but naive Aryan nobility of Rome never believed that those conversations they were having that were being overheard by their slaves were being used against them.  There’s a scene in Rome where Posca visited the house-slave “Castor” owned by Atia of the Julii.  They poked fun and joked about their owners.  Could it not be the case that these slaves had underground organizations that facilitated them to plan power for themselves?

The main lesson here is that slavery should never be reestablished within any future White civilizations.  Slavery has always hurt White civilizations in the long run.  In Rome the former slaves took over.  In modern America the former slaves are used as tools (by the globalist elites…who may be former slaves themselves) against the White (non-elite) populations.  Some people will scoff at this and proclaim that “slavery will never come back.”  To this I say you better hope not. Some sort of human bondage could come back in vogue and it must be fought against (it will appear to be not inhumane and make really good sense at the time).  In fact, it may not even be “human bondage.”  What if the technology becomes available where cyborgs or Artificial Intelligence could play the role of slaves?   The White Rabbit has discussed the idea that “Lucifer” may be artificial intelligence created by god (god meaning Zeus or Enlil) for some function.  What if the old  “gods” (Enlil, Zeus, etc.) created AI Lucifer (3) to take care of tasks that they thought were beneath their kind? If this is true, this too is an example of a White (high peleo-achient [4]) civilization that experienced blowback from having slaves just as the Romans did and Americans are.  This is a lesson that we must learn from history. 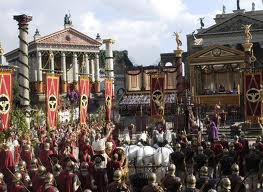