As Vikings below, so Vikings above?

The White Rabbit recently discussed the possibility of the returning Nordic aliens as being a group of “Intergalactic Vikings.” Recently I’ve been watching the excellent History Channel drama “Vikings.” The show depicts the story of Viking Ragnar Lothbrok and his adventures looting and pillaging Christian England with his Viking partners. Could it not be the case, that the reported Nordic Aliens (White gods) are just Vikings but on a larger scale? Instead of looting and extorting towns in Medieval Europe, these intergalactic Vikings do the same but to whole planets. The medieval vikings may be a microcosm of the space vikings who operate at the intergalactic level. And just like the medieval vikings would hit a town and then hit it again after 2 or 3 years, the space vikings might be coming back to hit earth again after 200,000 to 300,000 years. Or maybe 2 or 3 millions years.

The act of theft is rather un-honorable in this author’s opinion. The Vikings, Mongols, and Huns are looked down upon for being bandits, but if one examines history one sees mostly theft and killing. The Romans looted and extorted the people it subjugated. American history is partially a story of a large land grab in which the former inhabitants were done-away-with quite brutally. The Muslims invaded large areas of land and demanded tribute as well. 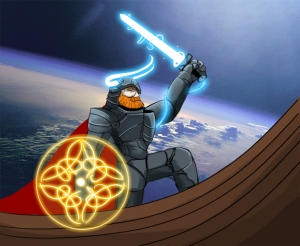 It seems like there’s two kinds of large scale organized theft. There’s “barbarian theft” and then there’s “civilized theft.” The major difference is that with civilized theft, the money is used partially for public works. However, with these public-works comes forced cultural/ethnic assimilation. The Romans, American and European Christians, and Muslims forced their way-of-life on the people they stole from. The Vikings and Mongols took money, but didn’t push their laws, gods, and customs on their subjugated peoples. When the Christian Europeans colonized the world, their priests came with them to change the very souls of the indigenous populations. The Vikings and Mongols were more likely to take on aspects of the people they dominated.

The highest law of the universe may be Purpose and Will towards creation and/or destruction. This idea may upset the people who assume that any advanced beings (or Aliens) are going to be “morally superior” to humans. Doctrines of love and goodwill that are expressed so beautifully in Christian, Islamic, Buddhist, and Hindu religions may be propaganda intended for the conquered people within the “civilized theft” model to keep them docile? While the plebs and proles hear sermons of love on Sunday, the elites of their civilizations live by the laws of power. The “barbarian theft” model is much more honest. With this model, if you get robbed you get robbed, but at least your very being isn’t under threat of being transmuted into chimerical monsters that bleed high fructose corn syrup. At least no one is proclaiming their undying love for you while the rob you.

If there are Intergalactic Vikings led by an Intergalactic Ragnar Lothbrok, then this may explain why so many countries are presently trying to buy or attain gold in large quantities? They may be preparing payment for the intergalactic Vikings? In relation to the “Vikings” series, I wonder who on earth would be the equivalent of King Aelle? In the series King Aelle is the King of North-Umbria and has to deal with the appearance of the Vikings in his lands. If there are Intergalactic Vikings preparing to invade earth, then perhaps the Anglo-American-Judeo elite’s god Satan or Lucifer takes on the role of King Aelle. King Aelle is a Yahwistic faith King who takes on Ragnar Lothbrok who follows the Norse faith. In the series Lothbrok even claims to be descendant of Odin himself. The HBO series “Deadwood” also featured an Olympian god of sorts in George Hearst coming to town for the gold while the Satan-like god Al Swearengen opposes him(1).

I highly recommend watching the series “Vikings.” It may be a glimpse of what’s to come on earth. Odin and Lucifer may be preparing to fight over the gold and life as we know it will change forever. If Satan/Lucifer is the victor, then we can expect our very being to be transmutated into chimerical creatures that are part animal, vegetable, or mineral(computers). If Odin is the victor, the earth may lose its gold supply, but at least we won’t be made into demonic soulless creatures of a chimerical nature.

And what about the Intergalactic Viking women?

One thought on “As Vikings below, so Vikings above?”